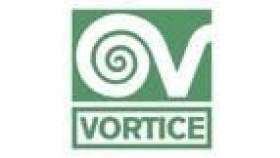 Today, Vortice is a multinational group operating through its own subsidiaries or through local dealers in more than 90 countries around the world, in the sectors of residential, commercial and industrial ventilation and air handling generally. Around 300 people are employed in the various companies of the Group, operating on three continents: Europe, Asia and South America.

The historic headquarters of Vortice Elettrosociali SpA is located in Tribiano (Milan) where some 160 people are employed: branches include Vortice France (opened in 1974 and based in Paris), and Vortice UK Ltd (opened in 1977 and based in Burton on Trent) and subsidiaries include Loran (acquired in 2010 and based in Isola della Scala, near Verona) where the Group concentrates its know-how in the field of industrial air handling.

Vortice Ventilation System is based at Changzhou in China: set up in 2012 to design, manufacture and market products specifically for the Chinese market. Vortice Latam is based at San Josè in Costa Rica: set up in 2012 as a commercial enterprise tasked with overseeing the growth of the South American market, and that of Latin America in particular. In addition, Vortice maintains a worldwide presence through more than 100 business partners making up a penetrative and professional network.